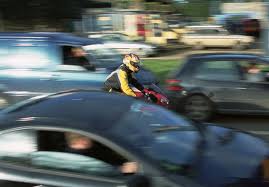 The Highway Code gives this advice to motorcyclists:

“Manoeuvring. You should be aware of what is behind and to the sides before manoeuvring. Look behind you; use mirrors if they are fitted. When in traffic queues look out for pedestrians crossing between vehicles and vehicles emerging from junctions or changing lanes. Position yourself so that drivers in front can see you in their mirrors. Additionally, when filtering in slow-moving traffic, take care and keep your speed low.”

For drivers this advice is offered at Section 181:

“When turning right at crossroads where an oncoming vehicle is also turning right, there is a choice of two methods

And from Section 211 which is specifically about cyclists and motorcyclists:

“It is often difficult to see motorcyclists and cyclists, especially when they are coming up from behind, coming out of junctions, at roundabouts, overtaking you or filtering through traffic. Always look out for them before you emerge from a junction; they could be approaching faster than you think. When turning right across a line of slow-moving or stationary traffic, look out for cyclists or motorcyclists on the inside of the traffic you are crossing. Be especially careful when turning, and when changing direction or lane. Be sure to check mirrors and blind spots carefully.”

There is more advice available in the Highway Code, but this gives you the picture. The advice is pretty obvious really. Look everywhere, beware of the vehicles you know it is difficult to see, and take care.

The Highway Code recognises the care necessary to see motorcycles, and the responsibility on a motorcyclist to take care as they are more vulnerable to injury than a driver. With the need for care and the risks identified, why are motorcyclists often persuaded and advised to accept they are partially to blame for accidents when the primary cause is that a driver did not see them.

There are some examples of tough Court decisions which either blamed or partially blamed motorcyclists for accidents. Our law is based on precedent which means the law is Judge made. To argue and decide a case you look at previous decisions and look for similar cases, precedents.

Some quite old cases involving motorcycles have been used for years by insurance companies to argue partial or complete fault on the part of a motorcyclist.

The case of Powell v Moody (1966) found the motorcyclist to be 80% to blame for an accident where a motorist collided with the filtering motorcycle. The circumstances were that a motorbike was slowly overtaking a lorry which had waved a car on to pull out in front of him on the main road. As the car pulled across the front of the lorry to turn in front of it the motorbike collided with it. The judge in that case concluded that the motorbike rider must be incredibly careful when overtaking when he cannot see what is in front of him.

In similar circumstances the case of Clarke v Whinchurch (1969) found the motorcyclist 100% at fault. The judge ruled that the motorcyclist should have realised something was happening up ahead when a bus in a line of slow moving traffic stopped to let a vehicle out from a side road on his left. The car came out quite slowly in front of the bus and was hit by the moped.

In the case of Leeson v Bevis Transport (1972) the motorcyclist was found equally responsible for an accident where a van driver emerged from a side road. The court said that the motorcyclist did nothing wrong in overtaking the line of stationary vehicles, but needed to keep an effective lookout, whilst the van driver should have been aware of the possibility of vehicles overtaking in this way.

More recently in the case of Worsford v Howe (1980) the motorcyclist was found 50% at fault. This was a two lane road. The nearside was for traffic going straight ahead and the second lane was for traffic turning right. The biker was riding in the second lane at a speed of 10-30 mph. A tanker had left a large gap in front of it to allow traffic to emerge from a railway yard on the left. A car emerged very slowly in front of the tanker across both lanes to turn right. A collision occurred. This case went to the Court of Appeal where the biker was found 50% at fault. The Court said that the biker was travelling too fast and that he had gone beyond his line of sight.

Next we move to Davis v Schrogrin, a Court of Appeal decision in 2006. The accident occurred on a long straight section of road with one lane in each direction. There was a long queue of stationary/slow moving vehicles. A motorcyclist travelling in the direction of the queue was overtaking at about 40 mph. He was riding over the central white line, and half to two thirds of the way into the opposite carriageway, was displaying a dipped headlight and a right hand indicator. He had been in that position for approximately half a mile and was not weaving in and out of traffic. A car driver lost patience and decided to carry out a U turn when the motorcycle was no more than five car lengths back, and the inevitable collision occurred. The Court found the car driver wholly at fault on the basis the motorcyclist was there to be seen. Even if the motorcyclist had been travelling more slowly, it would have made no difference because he had been right on top of the point of the accident when the driver first did anything to alert the motorcyclist of his intended manoeuvre.

Next up is the case of Farley v Buckley in 2007. A motorcyclist was passing a refuse wagon which was travelling in the same direction and was indicating an intention to turn left into a side road. The lorry was unable to complete its turn as the side road was narrow and there was a car waiting to emerge and turn right. The motorcyclist travelling at a speed of about 30 mph overtook the refuse wagon with its wheels virtually on the centre white line when the car drove out. A collision occurred. The Court held the motorcyclist wholly at fault as it considered that the motorcyclist was travelling at a too high a speed which in the circumstances was reckless especially having regard to the nature of the manoeuvre that he had been carrying out, the lack of visibility to his left and the fact that the refuse wagon had been displaying its left indicator.

We could go on looking at every case since time began, but you have enough here to give you the picture. The driver must take care to see a motorcycle, and the motorcyclist must take great care, and almost have a crystal ball. Think about what you are doing, what are the possibilities ahead, and what can’t I see.

Partial fault or contributory negligence is almost automatically argued in a compensation case involving a motorcycle. The argument should not be automatically accepted, and remember every case is decided on its own facts.

2 thoughts on “Motorcycle filtering through traffic”