A sad case which explains the approach which will be taken by Courts where a child is not sitting in the correct child safety seat.

A child called Emma was sitting in the rear of her mum’s car. They were driving along quite normally when a car came towards them, came across the road, and there was a collision. The driver at fault died from his injuries. His insurers admitted liability. 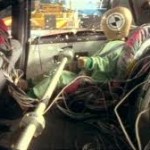 In fact there were two child seats in the car. The oldest was what I would call a baby seat. This seat was designed for children between 9 and 18 Kg, and between 9 months and 4 years. The child was just within the range for the seat, but it was getting a bit snug. The seat had a five point harness.

Mum had put Emma in a child booster seat, of the type which uses the car’s three point seat belt. The seat manufacturer stated the seat was for children between 15 and 36 Kg, between 4 and 10 years, and between 101 and 145 cm in height.

The argument was that Emma would have almost escaped injury in the child seat, or her injuries would have been much less severe. Emma. The Regulations which govern the use of seat belts were not much help to the Judge. The evidence was that Emma was too short for the booster cushion, and should have been in the baby seat. 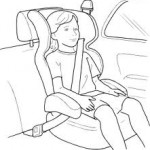 Not wearing a seat belt which would have avoided injury or made it less serious is contributory negligence, and that has been the law since 1976, even before the fitting of front seat belts in cars became mandatory.

Mum was found to have contributed by 25 per cent to the injuries of her child. As I said at the outset a very sad case. In reality the squabble was between the insurance companies of both drivers, so the 25 per cent contribution to the child’s compensation was paid by Mum’s insurers.

So what do you think would be the decision if there was not a choice of seats available to Mum?  What if Emma had been collected by a relative who only had the wrong size chair, or perhaps no chair available?

DirectGov tells us “You must wear a seat belt if one is fitted in any seat in any vehicle. There are few exceptions.

When you’re driving, you must only carry one person in each seat fitted with a seat belt. Anyone travelling in the vehicle aged 14 years and above is responsible for wearing their seat belt.

Children must use the correct car seat for their weight until they reach 135 centimetres tall or their 12th birthday, whichever comes first. See ‘When your child needs a car seat’ for more information.”

The same site tells us “You must wear a seat belt if one is fitted in the seat you’re using. But you need to wear your seat belt correctly for it to work properly in a crash.”

This was a decision of a High Court Judge which can be seen in full at http://www.bailii.org/ew/cases/EWHC/QB/2012/1078.html

Remember all cases are specific to their facts, so do not try to read wider principles into them. Always take advice from an experienced accident and compensation solicitor.