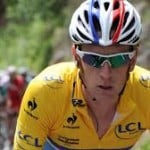 “I haven’t lived in London for 10 to 15 years now and it’s got a lot busier since I was riding a bike as a kid round here, and I got knocked off several times. END_OF_DOCUMENT_TOKEN_TO_BE_REPLACED

A 16 year old cyclist was riding along the pavement came into the road and was hit by a car travelling in the same direction.

The accident occurred at about 8 p.m. The claimant had been to fetch his bicycle from a friend’s house. The road was a long straight road with one carriageway in each direction and with a speed limit of 30 mph. For some of the way a footpath runs beside the road and the claimant was riding along that footpath. END_OF_DOCUMENT_TOKEN_TO_BE_REPLACED

Cyclist jumps a red traffic light and still wins compensation – but only just.

An accident between a cyclist and a taxi car happened at a T-junction controlled by traffic lights. The taxi went across the junction on a green light when a cyclist who had jumped a red light came from his left. The cyclist was badly injured and could not say what happened.

The cyclist won his case for compensation, but he lost 80 per cent as he was found to have contributed to his injury – contributory negligence.

So how did the cyclist win his case in the first place?

The taxi was travelling between 41 and 50 miles per hour when the speed limit was 30 miles per hour. Speed is very important as the reaction, braking time and braking distance are much longer at 41 to 50 mph compared with 30 mph.

The cyclist was not wearing high visibility clothing. This was not a factor as it was the speed of the taxi which was the problem, rather than not seeing a darkly dressed cyclist. The speed limit should be seen as an indication that a driver is likely to come upon hazards and may have to slow or stop.

The other side of the argument is there would have been no accident had the cyclist not jumped a red light. There was also time for the cyclist to brake or swerve, but the evidence suggested he was not looking. It was early in the morning so maybe he thought the way would be clear.

The case illustrates the heavy duty on the driver of a vehicle which is heavy and fast, and likely to do more damage than a cyclist or a pedestrian. On this basis the driver was to blame, but the partial blame of the cyclist was put at 80 per cent. That means the cyclist who was seriously injured will only receive 20 per cent of the compensation value of his injuries and loss.

I have not seen a full transcript of the High Court Judgment but a summary is available by clicking here.

For other examples of contributory negligence please click here.

The answer in all cases is to seek good advice from a personal injury solicitor.

When I act for a cyclist involved in an accident I always ask if a helmet was worn. The reason is that failure to wear a helmet can be used to reduce your compensation after a cycle accident.

The law may agree you have contributed to the injury by failing to wear a cycle helmet. This is called contributory negligence. The car driver is at fault, or negligent, by pulling out in front of you and causing the bicycle accident, but you are partly to blame for not wearing a cycle helmet, if wearing the helmet would have reduced the injury. You will be judged to have contributed to your injury, a percentage will be attached to that contribution, and that percentage will be deducted from your compensation. This is over-simplified so do read on.

END_OF_DOCUMENT_TOKEN_TO_BE_REPLACED

If this short film by James Cracknell does not convince you to wear a cycle helmet, nothing will. Please watch and wear that helmet.